I can hardly believe it, but NO LIMITS is about to go live.

I originally wrote this book because – no matter what people told me – I simply could not stop obsessing over Harris’s story. I had already sunk so deep into his head, and into the desperate situation that he and Amie found themselves in, that there was no turning back. I also couldn’t stop thinking about the issues around ice use in local country towns (towns just like my own), and how it was affecting the teenagers in those towns – even though I was warned that a book about teens and drug crime would likely never make it to print. There were plenty of times I thought a NO LIMITS release day would never come…but here we are. Bloody amazing.

If you’d like to help out with the NO LIMITS launch, and make the book go right over the top, then yay! You can!

Here are some images I’ve whipped up to encourage people to get on board with the release. If you’d like to blag them around on your Twitter, Facebook or Instagram channels, help yourself. Go nuts, and thank you! 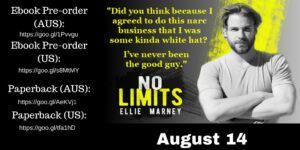 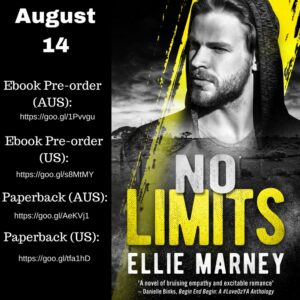 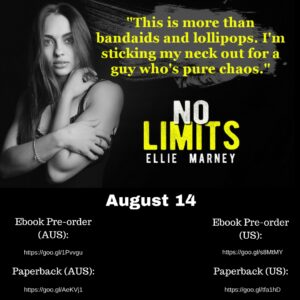 Whee! I am so excited about the August 14 release day and sharing this book with readers!

Finally, if you’re in Melbourne, see you on August 18 at Dymocks CBD Collins St at 6.30pm for the launch party to end all launch parties – free booking is here. I will likely be nervous as hell, but seeing friendly faces there will be awesome.