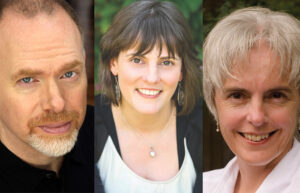 This month’s title for bookclub is ZEROES by the collaborative team of Scott Westerfeld, Deborah Biancotti, and Margo Lanagan.

I think the first book of Margo Lanagan’s that I ever bought was Black Juice, her collection of short stories – and I quickly bought the companion collections, Red Spikes and White Time, once I realised what I was reading. Fiercely original, with sensuous language, the story Singing My Sister Down – about a family spending time with their rebellious daughter before her unusual execution – is probably the best-known of the stories, after it was nominated for both the Hugo and Nebula awards. She won a a Printz Honour award for her book Tender Morsels. 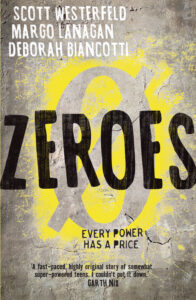 I remember going to see Margo Lanagan and Melina Marchetta speak on a panel at the Melbourne Writers Festival, and then lining up to have my copies of the collections signed, gushing like a fangirl all the while.

Deborah Biancotti is an Australian writer of genre-bending SF, horror, fantasy and steampunk. Her story And the Dead Shall Outnumber the Living was shortlisted for a Shirley Jackson award, and she has published two collections of short stories, Bad Power and A Book of Endings. I haven’t read enough of her work, and plan to remedy that after reading ZEROES.

Scott Westerfeld is another enormously creative thinker and writer – his Leviathan series has been popular at our house. His other series titles, in Midnighters and Uglies, are equally good, and he has released a new series, starting with Horizons, just recently.

ZEROES is a superpower story – but superpowers that you don’t usually come across. The tagline for the series is ‘Every Power Has a Price’, and I think that’s enough to be going in with; whatever you think about SF/fantasy, expect to have your ideas thrown around as the formula is mashed up and played with by these three incredible authors.

Remember, you can order ZEROES through Boomerang Books, and get free shipping with the ‘loveoz’ promo code.

And I do hope you enjoy the book!