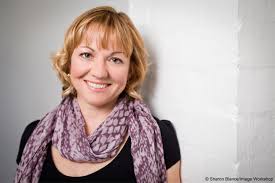 So I’ve already told you a little bit about Nicole Hayes, the author of this month’s title, A SHADOW’S BREATH: she’s written two other YA books (The Whole of My World, and One True Thing) and she’s deeply involved in The Outer Sanctum, AFL football commentary in general, and the brand new AFLW comp in particular. Now Nicole is here to answer a few questions herself and put the record straight about her sordid ballet history…

* One curious or unusual thing about you that most people don’t know:

A lot of people know I played footy as a kid – illegally mostly, and I was eventually kicked out of the team because “girls can’t play footy”. Ha! (Obviously bollocks, evident today.) But, what people don’t know is that in between footy training I was also studying classical ballet – with tutus and crossovers and ballet shoes. So for several years of my primary school years and into early secondary, Tuesdays and Thursdays I was all about speckies and drop-punt; Mondays and Wednesdays it was chasse and glissade.

* Working in silence? To music? With snacks? No snacks? What are the essentials for your writing routine?:

I love cafés for a serious writing session when I’m getting started on a novel. I need the distraction of background noise and need to leave my house behind, with all the demands it seems to make on me whenever I walk in the door. But as my deadline looms, I lock myself in my back office. So it’s completely different depending on where I am with a novel. It’s weird and sometimes impractical juggling both processes, but for now it’s working.

* We’re at a dance party right now, and the DJ wants to know which song gets you out on the floor for major boogies and you say…:

Losing My Religion by REM. It’s probably not a dance song, but it has such powerful memories for me of backpacking through Europe – every busker in every Continental city seemed to be playing it at the time – that I literally can’t stand still when it comes on. Also, expect very loud singing. (For which I will apologise in advance.)

* While researching your book, you found out some crazy stuff, and it was this:

Humans didn’t see the colour blue until the modern era. I’m not even kidding.

I was doing all this research on painting, and colour and light, because Tessa is learning to paint in A Shadow’s Breath, and I came across all this research and evidence to suggest that blue is a modern phenomenon. In literature dating back to the 1800s, the ocean was described as “wine-dark” and other variations of reds and greens. Not just in English either – it’s true of all the major languages. That actually blew my mind.

* The best opening line from a book, in your opinion, is:

Thank you!  And thanks for getting your sillies on with #LoveOzYAbookclub J