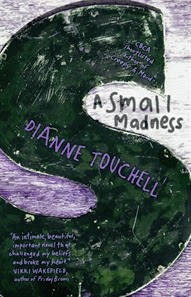 Right, it’s time to get into the meat and potatoes of Dianne Touchell’s A SMALL MADNESS. I’ve been looking forward to this discussion, as the book raises a whole heap of issues with its plot and characters, as well as with its form, and I’m very interested to hear other peoples’ opinions on it.

First of all, issues of form. A number of people have said to me that they didn’t feel A SMALL MADNESS was a YA book. What constitutes a ‘YA book’ seems harder and harder to get a handle on these days. The chief concerns, I understand, were that a) the subject matter was too dark; b) the style was too adult; c) the packaging and content didn’t seem to be designed with teenagers in mind.

On the latter charge, I would agree that the packaging didn’t seem to be aimed at teenage audiences – it was too arty and oblique to appeal to teenagers, I felt (if you’re a teenager and think otherwise, please respond and let me know!). Teenagers aren’t stupid, but they do judge a book by its cover, and they appreciate more hints about the actual content of the book apart from just the blurb. The US cover was perhaps a bit more direct (see right). While the Aus cover was extremely beautiful, and striking, I felt that it was designed more to appeal to adult readers (specifically, judges of children’s literary awards and teachers looking for curriculum content, in which case you’d say the design was a resounding success).

Which is fine, actually, but I felt that the subject of the book was too important to risk turning off teenagers with the cover – more teens should read this book. It’s a really important book. Then again, maybe teens would be nervous about reading a book that overtly revealed it was about teen pregnancy. Maybe the cover served its purpose by being a bit camouflaging. But I wasn’t convinced that the cover was designed with teens in mind. 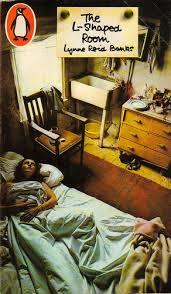 And as I said, I want more teens to read this book. Because I think the content is dark, but also necessary. It’s about something that every teenager deals with at some point: first sexual relationships, and how easy it is to make mistakes that lead to pregnancy, and the potential terrible consequences of that. I couldn’t help but think of Lynne Reid Banks’s THE L-SHAPED ROOM. Was A SMALL MADNESS a cautionary tale? I’ll leave that for you to decide. But I don’t think it was didactic or preachy in tone, at all. I also think that teenagers are perfectly capable of dealing with dark or intense subject matter. And the book is written in such an interesting and beautiful way that I wanted to read it again almost as soon as I’d finished it – I had no problems with the style.

Finally we get to the subject matter, and for that I will commend you to the words of Anne Buist, who is both a writer (of adult psychological thrillers – see her books Medea’s Curse and Dangerous to Know here) and a professor of Perinatal Psychiatry at the University of Melbourne. In her professional life, Anne has dealt with many cases of infanticide and pregnancy/postpartum homicide. I approached her for comment, as the book’s subject fitted so neatly into her area of expertise, and she graciously agreed to read the book (she read it in one night! She reads fast). This is what she had to say about the story of A SMALL MADNESS:

For these comments I have my “Professor of Perinatal Psychiatry” hat on, rather than coming from a writer or reader’s perspective, though there is some overlap; authenticity of character for me is an essential ingredient for a book to be “good”. (The inclusion of quote marks here is the writer part of me—the evaluation of quality has invariably some subjective component of taste and preference!)

I have dealt with probably a dozen cases of denial of pregnancy professionally, and heard and read about/discussed with colleagues many more. There is no “classic” case but there are some general commonalities, and though some I have seen have been denial at a deep psychological sense, some have been very similar to Rose as depicted in A Small Madness—that is, with a significant element of conscious knowledge but refusal to deal with it or manage it in any real way. Many have a family member who has asked “are you pregnant” but not pushed it, so Violet, too, is I think believable. The patriotic dogmatic authoritarian-style parenting of Michael’s father is also very commonly seen in the families of the girl. What is more unusual in this book, though I think still plausible, is Michael’s involvement.

Overall I think the author did a good job, and this could fit right in among my cases. If anyone is interested, read Helen Garner’s latest selection of essays Everywhere I Look. It includes one called Punishing Karen, a true story, not unlike Rose. Though the psychiatrist (who was me) is quoted (correctly) as saying “dissociation” i.e. a break from reality is the usual mechanism for what happens at the time of delivery, I think now it is much more complicated and may be more stress and panic, in not very bright young women with poor problem solving abilities, which Touchell manages well in both Rose and Michael.

One other thing… “Karen” in Punishing Karen was charged with Infanticide (and convicted) in Victoria but never did any gaol time – in NSW she may well have. If it had been her boyfriend who killed the baby he would have been charged with murder (and certainly done gaol time even if the charge was lessened to manslaughter). The Infanticide law is one of the few times the law favours women (it can’t be used for men – it has to be the biological mother, so not even adoptive mothers can use it).

So this has turned into a very long discussion post, and I’ve not included links to any reviews of the book this month, but if you’d like a more rounded idea of how A SMALL MADNESS was received, check out here and here. I’d like to thank Anne Buist for her contribution to the discussion, which was both enlightening and extremely generous – thanks Anne!

I’m interested in what you all have to say about this one! Remember, if you don’t feel up to providing a longer comment, feel free to give the book a star rating (1-5 stars). But I’d love to hear your views, either here in the Comments section or on the FB group thread.