Hello, I’ve had a slow start this month due to school holidays and illness, sorry about that! But I’m very happy to announce that we have a new title – AURORA RISING by Amie Kaufman and Jay Kristoff. And after being unable to get my hands on it for a while (because my kids confiscated it as soon as it arrived), I am extreeeemely excited to be reading this book! 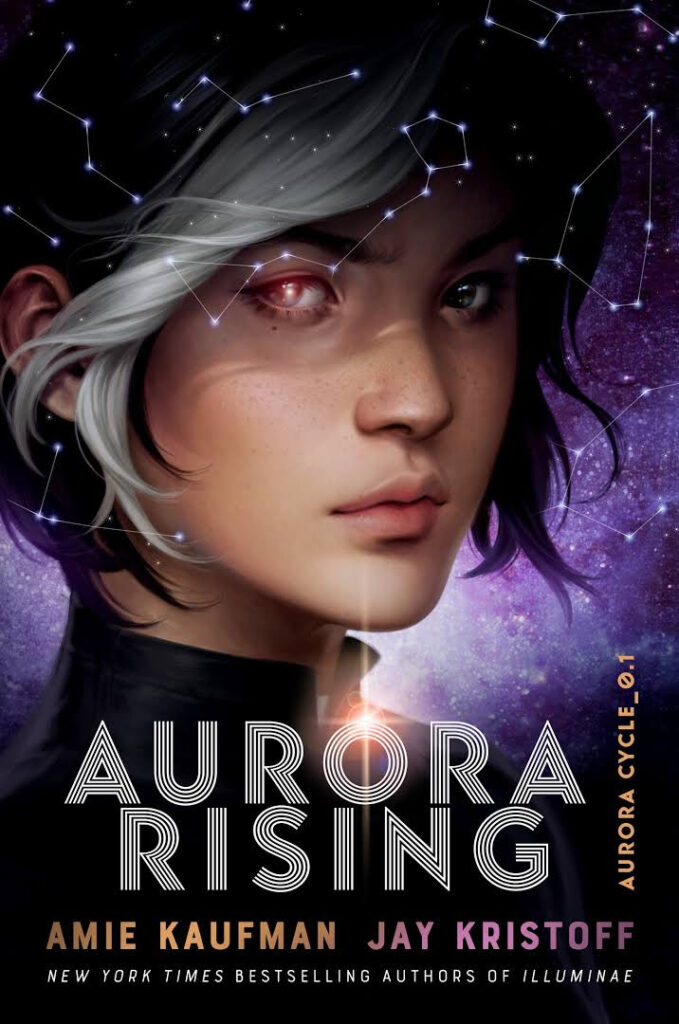 The year is 2380, and the graduating cadets of Aurora Academy are being assigned their first missions. Star pupil Tyler Jones is ready to recruit the squad of his dreams, but his own boneheaded heroism sees him stuck with the dregs nobody else in the Academy would touch…

A cocky diplomat with a black belt in sarcasm
A sociopath scientist with a fondness for shooting her bunkmates
A smart-ass techwiz with the galaxy’s biggest chip on his shoulder
An alien warrior with anger management issues
A tomboy pilot who’s totally not into him, in case you were wondering

And Ty’s squad isn’t even his biggest problem—that’d be Aurora Jie-Lin O’Malley, the girl he’s just rescued from interdimensional space. Trapped in cryo-sleep for two centuries, Auri is a girl out of time and out of her depth. But she could be the catalyst that starts a war millions of years in the making, and Tyler’s squad of losers, discipline-cases and misfits might just be the last hope for the entire galaxy.

They’re not the heroes we deserve. They’re just the ones we could find.

AURORA RISING is the first in The Aurora Cycle – it’s not an epistolary novel like The Illuminae Files, but this book is the beginning of another thrilling series from Amie and Jay, who between them have multiple Aurealis awards, NYT bestseller listings, a Gold Inky and an ABIA.

You might be thinking, with all this street cred, why bother giving them an extra plug in #LoveOzYAbookclub? Well the first reason is because they keep releasing damn fine books. The second reason is that every time I visit local schools, I still find classfuls of students who’ve never heard of them – or don’t believe they come from Australia. Believe it, folks!

If it’s anything like Amie and Jay’s other offerings, AURORA RISING will be jam-packed with pithy quips, mind-bending spaaaace, smart banter, clever easter eggs, names of friends and pop culture in-jokes that are always a helluva lot of fun to spot, so keep your eyes peeled! And considering I could literally read their books all day, the concept of a new series sounds pretty good to me.

If you’d like to use the code ‘loveoz’ when ordering this months’ title from Boomerang Books, go right ahead and receive free shipping. Or if reading in digital is more your style, you can find the book here.

Because I’m introducing our July title so late, this title will spill over into August, with discussion scheduled for that month. So there’s no hurry – take your time, and hope you enjoy this month’s read!