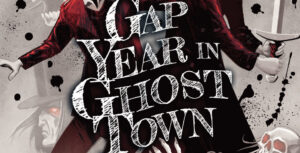 I love Michael Pryor’s writing – it’s clever and witty and gives generously to the reader (much like Michael Pryor himself!) – so I was a bit pissed off that my copy of GAP YEAR IN GHOST TOWN was somehow delayed, to the point where I still haven’t received it yet, argh (I didn’t order it through Boomerang Books, if you were wondering). I like to read the Book of the Month in the month we cover it! But unfortunately that was impossible for me this month.

So two bookclubbers have ridden to the rescue with their reviews of GAP YEAR – big thank yous to Pat Pledger and Miffy Farquharson for providing this month’s reviews. Both of them say glowing things about GAP YEAR (which makes me want to read it even more now). Pat writes in ReadPlus that GAP YEAR has ‘snappy humour’ and ‘action galore’, plus she found the platonic friendship between the two mains really refreshing, bypassing the typical romantic love triangles of a lot of YA. As much as I happily barrack for love triangles, I’m looking forward to sinking my teeth into a platonic friendship – it really isn’t something you encounter often, it’s true.

What I really love about Michael Pryor’s work, though is the humour. Everything I’ve read of his – from his BEGIN END BEGIN story ‘First Casualty’ to his other series’ like THE EXTRAORDINAIRES and THE LAWS OF MAGIC and more – all contain that amiable sense of humour. While I think we see a lot of wit and snark in YA, genuine laughs are often not much on offer. It’s something I wish we could have more of, and I think it’s actually a big draw for readers – a lot of successful MG (I’m thinking PERCY JACKSON and LOCKWOOD & CO and SKULLDUGGERY PLEASANT here) has a strong thread of humour, which often fades away in YA as the stories begin tackling more serious issues. So can I suggest…more belly-laughs in YA? It would get my vote.

But back to GAP YEAR: both of our reviewers this month agreed that Melbourne was a great setting – Miffy points out that that ‘the Melbourne-ness doesn’t get in the way of a ripper story of secret societies, criminals, chases and danger’ and that there are ‘snippets of information and descriptions that bring the city to life’. Personally I’m a big fan of Melbourne as a location – and of all the cities in Australia that I know, Melbourne has enough old cobbled alleyways and gritty nooks and crannies to make it quite feasible as a spooky story location.

Anyway, that’s enough to be going on with for our discussion this month, I think, and thank you again to Miffy and Pat for coming to my aid with reviews. I’ll let you know when I finally get a copy of the book! And hang onto your hats for next month’s read – we’ve pushed the schedule out to April, so I’ll announce the new title for that month in about 2 weeks’ time – stay tuned, folks!