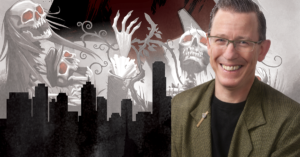 Heya! This month has been a bit hectic for me (for some strange reason…ha), so unfortunately I wasn’t able to arrange a Facebook chat with Michael Pryor, the author of our current title GAP YEAR IN GHOST TOWN. Although he did see me running around at my book launch like a chook with its head cut off, so I guess he’ll forgive me. And I hope you forgive me too, because I’ve got this juicy substitute: Michael has kindly agreed to answer some of our slightly-offbeat bookclub questions, and he even did extras, as he is that kind of guy (ie. a generous, wonderful guy).

So here below, Michael Pryor on writing, nude tennis, and other exciting things…

After writing so many stories set in far off imaginary or historical settings, I had an urge to write something set a bit closer to home, but not an everyday contemporary novel. I wanted some sort of fantastic element, something magical and otherworldly because putting that against a familiar backdrop can generate extra story goodness. Plus, I wanted funny. Almost all my books have some element of humour – I can’t help myself –but I wanted this one to really go hard in this area. That meant I needed smart characters who could trade smart stuff back and forward. Not only for laughs, but because this sort of to-and-fro is excellent for helping readers get an insight into character.

I still have the teddy bear that my dad gave me the day I was born. He’s a bit battered and worse for wear, though …

Okay –three hot books you would run in to save if your house was burning?

My hardback, three volume edition of Lord of the Rings that I got for Christmas when I was 13. 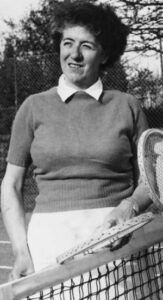 While researching your book, I found out some crazy stuff, and it was…

Enid Blyton enjoyed playing nude tennis. This had nothing to do with what I was researching, but I got onto EB via a side-track after a side-track and I found that little gem.

‘Do You See What I See?’ because it’s about special people who can see ghosts, and because.

Writing superstitions – do you have them? What are they?

I don’t know if it’s a writing superstition, but I get obsessive about saving my work. Yes, I have had a couple of catastrophic losses in the past – power failures are a writer’s nightmare – and so I am continually hitting Control-S as I type.

Rec us a book on writing craft, would ya?

I think Stephen King’s ‘On Writing’ is an excellent, practical guide to writing – even if he doesn’t always practice what he preaches. A lesser-known book, but one that full of all sorts of insights into the craft of writing is Natalie Goldberg’s ‘Writing Down the Bones: Freeing the Writer Within’. It might be hard to get hold of, but it’s worth it.

Horror Challenge – which fave horror movie would you cheerily inflict on your friends?

I’m pretty squeamish, so I tend not to favour the Gore Fest style of horror. I do love creepy horror, the unsettling sort with a slow build towards a freak out climax. If I can find one like that that also has top-quality filmmaking technique, then I’m in heaven, which is why I love Stanley Kubrick’s ‘The Shining’. It’s a masterpiece. Honourable mentions: Psycho (the original, naturally), the Wicker Man (bizarre, spooky), The Cabin in the Woods (pop culture reference joy), Shaun of the Dead (funny scary – just like Gap Year in Ghost Town).

As much as I love a good flamethrower or shot gun, I reckon you can’t go past an axe in your zombie apocalypse for a simple reason – an axe never runs out of ammunition. If you know how to sharpen it, a skill that is not too hard to learn, an axe will stand you in good stead.

The best opening line from a book, in your opinion, is:

‘It was a pleasure to burn.’ Fahrenheit 451, Ray Bradbury

It’s not a long, lyrical sentence like some other favourites of mine (Try Charles Dickens magnificent ‘It was the best of times, it was the worst of times, it was the age of wisdom, it was the age of foolishness, it was the epoch of belief, it was the epoch of incredulity, it was the season of Light, it was the season of Darkness, it was the spring of hope, it was the winter of despair, we had everything before us, we had nothing before us, we were all going direct to Heaven, we were all going direct the other way – in short, the period was so far like the present period, that some of its noisiest authorities insisted on its being received, for good or for evil, in the superlative degree of comparison only.’ From A Tale of Two Cities) but its punchy crispness nearly slips past until you do a double take. What?! It’s a pleasure to burn? What the heck is going on here? Great opening.

Michael, thank you for joining in on #LoveOzYAbookclub and thanks for your answers!