Good morning! One of my fave things about bookclub is that great feeling when we have the opportunity to introduce readers and fans to brand new (or new-to-them) authors. This month’s title, KINDRED: 12 Queer #LoveOzYA Stories, is an anthology that gives readers a chance to sample a variety of amazing new talent. And this book’s talent-cup runneth over: KINDRED has a selection from a literal Who’s Who of Australian literature, including Christos Tsiolkas, Benjamin Law, Claire G Coleman, Omar Sakr, Alison Evans, Jen Wilde, Marlee Jane Ward, Nevo Zisin, Erin Gough and Ellen van Neerven. 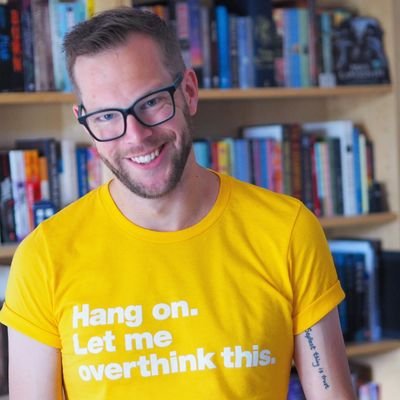 The person who has pulled this rainbow of incredible talent together is Micheal Earp, Melbourne-based children’s/YA bookseller and writer. Originally from NSW, Michael studied teaching before moving into his Master of Arts in Children’s Literature, all the while building up 16 years’ worth of credentials in children’s bookselling. His writing work has been published in The Victorian Writer, Aurealis, and Underdog: #LoveOzYA Short Stories. He hand-sells amazing kid’s and YA literature at The Little Bookroom in Melbourne.

* Why this book? Why this story?

Why this book? Because I simply couldn’t think of anything I’d rather offer the world than a wonderfully queer collection of YA short stories. And what a cracker of a list of contributors! Australia certainly has so much to offer.

Why this story? I wanted to write something fantasy. I wanted a gender-queer witch. I’d just gone through a horrific break up. Enough said.

Just one? I’ve kept every piece of writing I’ve done since I started my angsty poetry as a 14-year-old. And no, it’s not for public consumption.

* Okay – what three hot books you would run in to save if your house was burning?

You’re killing me with this just three business! Shaun Tan’s The Red Tree, it’s a signed edition, and the book that was given to me for my eighteenth birthday that set me on this journey of book obsession and writing. Two Boys Kissing by David Levithan. Also a signed edition that I went all the way to America to get after my original signed edition was heinously stolen from me. And lastly, Release by Patrick Ness. Also signed and resonating like a gong in my head, in my heart.

P.S. I have too many signed editions. This is a crewel question.

Ooo, can it be a real thing?

Simeon should be played by Narnia era William Moseley.

It would be awesome to have Wyll played by Keiynan Lonsdale.

And Wren would be jaw-dropping if Tilda Swinton played them. But that’s because I love her so! I’d actually want a non-binary actor to play that role.

* Trash Media Challenge – which fave trash movie/show would you cheerily inflict on your friends?

I’ve been known to do exactly this! My rot-your-teeth TV of choice is RuPaul’s Drag Race. However, I find myself increasingly disenchanted by it. Not that I’ll stop watching anytime soon. I’ll just reminisce about the glory days.

Thank you for visiting bookclub, Michael!  And thanks for getting your sillies on with #LoveOzYAbookclub J