I always feel a bit like I’m in a state of emergency, so this title is something of a misnomer! Actually, it’s not an emergency, but life gets very busy.  I’ve been neglecting my blog lately to do other Very Important Things, but it’s time to pull my finger out…

I’m in the middle of edits for my new book. I was having a pretty hard time of it, but I had a bit of a brain wave (while listening to How To Make Gravy by Paul Kelly) so now I feel like I know what I’m doing – insofar as its possible to feel like you know what you’re doing during early edits.

I always try, at first, to get rid of things that have been bugging me: certain phrases that seemed a bit clichéd, or maybe just didn’t quite ring true, anything that I didn’t feel 100% comfortable with in the initial draft.  Those bits are easy to delete. But it’s harder to cut scenes and dialogue that you’ve become attached to. You justify retaining them by telling yourself they’re important for the set-up for the next scene, or that you need them for the flow of the narrative, or to flesh out a character… It’s incredibly hard sometimes to be dispassionate about it. It’s also hard in the early stages of edits, when you’re just figuring out what the true shape of the story will be.

But you have to be a bit brutal – does this scene really move the story forward? That’s always what I end up pushing myself to remember. This book, like all the others, will go through more than a few edits to make it streamlined. Anything that I cling to now, that I’m reluctant to part with, might seem more obviously extraneous as the process goes along.

What I’m up to 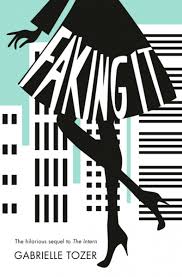 I had a great time at last weekend’s Bendigo Writers Festival, where I stepped in for another colleague to take part in a panel with Gabrielle Tozer (Faking It, The Intern) on ‘Happy Endings’.

This week, as part of the Stella Schools Program, I’m speaking with Bec Kavanagh and Simmone Howell at Braemar College in Woodend this Wednesday 24 August – I’m looking forward to that a lot, especially audience questions about writing, and women and writing. And working with Bec and Simmone is a dream, they are both so lovely.

I’m also attending the Sisters in Crime Davitt Awards on Saturday night 27 August, where Every Move is in contention for the best YA crime award, so it’s time to break out the frocks and champagne. 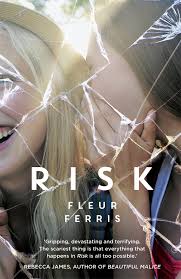 Not that I anticipate celebrating – the YA category is very strong this year, with Risk by Fleur Ferris, In the Skin of A Monster by Kathryn Barker, and Stay With Me by Maureen McCarthy also in contention, and those women are all on form. But I’m looking forward to dressing up (compared to my normal writing clothes, which usually consists of trackie pants and ugg boots) and having a great night with the Sisters.

On Sunday 28 August I’m attending the Melbourne Writers Festival, as part of the audience – I’m hugely excited to see David Levithan and Rainbow Rowell, but most especially to hear Melina Marchetta (my literary hero!) speak about her new book.  Then on Wednesday 31 August, I get to actually be onstage for the MWF Schools Program – I’m holding a session on Writing YA Crime, and I’d love to see you there, if the tickets aren’t already booked out.

Look, I hate blagging on about stuff that should be freaking obvious to everyone, but this is worth repeating: do not, I repeat, DO NOT slut-shame. A number of Melbourne schools were recently notified that male students had been sharing intimate and non-consensually-acquired photos of female students over an internationally-run social media platform. One school’s response was to herd all the female students into the assembly hall and tell them to make sure their skirts were below the knee, and not to wear make-up.

People, this is the wrong approach.

While it is vital that every teenager who uses a phone understands that pics sent via phone or online are not private, and that it’s hugely important that you think carefully – and slowly, and very warily – before you click Send, telling girls that their clothing and behaviour and level of modesty are the Big Problem is wrong. Women have put up with this shit for way too long.

What horrified me more was the comment response to the news articles about this issue. People were saying that if a girl sends an intimate photo of herself into the world, she’s asking for it. Wrong again.  Women are not the ones who should be changing or restricting themselves to mitigate predatory male behaviour – we’ve done it for centuries and it never works. Predatory sexual behaviour isn’t about sex, it’s about power. We’ve put ourselves in burkas and we still get raped. How does lowering our hem length and forswearing makeup help us, exactly?

And I’d like to know why, in this century, we are still telling women that male behaviour is a female problem.

Okay, I’m looking forward to Melbourne Writers Festival and the Davitt Awards night, big time. Those events are always incredibly fun, and I get to connect with other people in the literary industry – what is still called ‘networking’, for some reason, but actually means ‘hanging out with your mates who you have a lot in common with to talk shop and life’.

I’m also really looking forward to some fine weather. It’s been raining pretty constantly here at our place, as winter recedes, and I’d really like to get out in the garden! Sure, I could put on my mac and gumboots and go out in the cold, but…well, it hasn’t been hugely motivating. Bring back the sun!

You might have noticed that bookclub is on a month-long hiatus – after posting the final discussion thread for RUBY MOONLIGHT by Ali Cobby Eckermann, I decided to give myself and everyone else a bit of a break from our TBR piles. I need it as much as everyone else sometimes! I had also gotten behind with my bookclub posts, and noticed that there wasn’t as much discussion, so I thought it might be time to take a minute to regroup.

I’m putting out a blog post tomorrow, asking for feedback about bookclub, and running a competition to win a free copy of our next bookclub pick – so stay tuned for details here, and have a think about bookclub, and what you’d like to get out of it. The best suggestions, I’ll be taking on board (and rewarding with a free book!)

I’ve been dabbling in non-fiction a bit lately – sometimes when I’m writing or editing I find it’s easier to read a non-fiction work, rather than get distracted by another author’s narrative.

So I’m working my way through Curious Pursuits by Margaret Atwood (literary hero!), a book of her occasional essays and writings, which covers everything from Writing the Male to eulogies for people like Angela Carter. Yes, it’s fantastic. 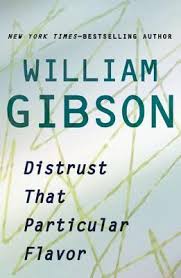 Another literary hero of mine is William Gibson – that man’s mind moves in extraordinary ways. His book Distrust That Particular Flavour was amazing. It’s a mix of forewords to other people’s books, talks he’s given, essays he’s written for magazines like Wired etc and it was another glimpse into a unique perspective on the world, a perspective that somehow seems to leap over all the current ideas about science fiction and give us something original and fascinating and totally unexpected. 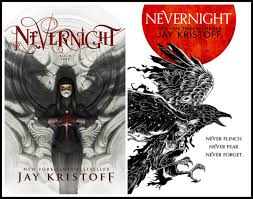 In fiction, I’ve been reading through Jay Kristoff’s work – I’ve already read Illuminae (with Amie Kaufman – still my fave) and the Lotus War trilogy, but his new book Nevernight is glorious. Outstanding marks for world-building. I love seeing how some writers mature and grow in their craft, and I think you can really see that with this book. 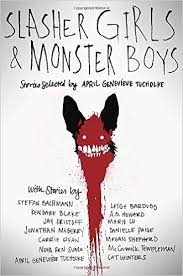 I’ve also read his short story ‘Sleepless’ in the YA horror anthology Slasher Girls and Monster Boys, edited by Genevieve Tcholke, and it was great. I actually loved almost all the stories in that book (Marie Lu’s story – whoah – and shorts by Leigh Bardugo and Jonathan Maberry were my other favourites), and I’m a big fan of horror, so I’d love it if this ushered in a new YA horror trend. How cool would that be?

So that’s it from me for this month. Hope you’re all going great, and catch up again soon!