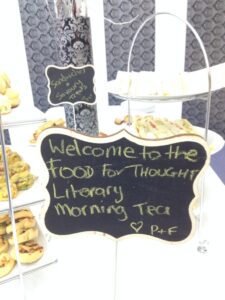 So I went on a road trip for the Stella Schools Program recently. Bec Kavanagh and I drove four hours from my place to Balmoral, west of the Grampians, for a school panel and workshops. The difficulty of driving through the night in someone else’s car, when you haven’t driven stick for years, and you’re tired, and constantly scanning the road shoulder for kangaroos, was offset by the chance to talk (so rare, getting the chance to really talk! Gig time is usually a time of fractured conversations and half-finished, interrupted sentences) and also the chance to listen to music from a different playlist, and know you’re on an adventure.

And I was telling Bec that I don’t know what’s going on with my new book.

What do you mean, she asked, and I explained how the book came into being. How I pitched a number of stories to my agent and editor, and they liked none of them. Then I finally found a pitch they liked, but it didn’t seem to be any different to the others. Like, what was it about this idea that seemed different? That stood out? I didn’t know. But they liked it, and after the arduous process of thinking up a bunch of original new ideas and roughing them up and pitching them, I was just so relieved that I’d found something they were happy with that I was like, okay, great  and phew, thank god.

I asked my agent and editor, What was it about this pitch that grabbed you?

It’s got more you in it, they said.

So I was like, Oookay. But I still didn’t really get it.

Then I went and wrote it. But the whole time I was writing it, I was not enjoying the experience. It was different – so different! – from my other books. The process was different, like, completely different. I was writing with a plan. I was writing to music, which I never ever do. I was writing during the day, not early in the morning, and there didn’t seem to be that emotional charge that possessed me (yes, it really felt like being possessed) when I was writing the Every series. I wasn’t excited about it. It felt dry and flat, on good days, and forced, on bad days.

I complained to my writer friends. Ugh, I said. This goddamn book, I said.

How’s the book going? people would ask me. And I would say, It’s…going.

Maybe this is second book syndrome, I thought, because although I’ve written a 3-book series, maybe that was more like my first book, those three interlinked books, and this book – this stupid fucking standalone book in a new world with new characters – maybe this is actually my second book.

Or maybe I’ve just lost it, I thought. On my worst days, I thought that.

My friends patted me gently and told me I hadn’t lost it. I submitted partials to my agent and my editor. It’s great! they said. My agent sold the book, for good money. I applied for a grant, and got it. My editor was happy.

So all the external indicators were very good. But still…still this nagging, annoying voice hung around. Ugh, it said. This goddamn book, it said.

I was confused. I hadn’t felt this confused about my writing since my pre-publication days. A friend asked me for tips for an article about When You Know That Your Writing is Good Enough, and I felt like a fraud, because I didn’t even know whether the book I’d written and submitted was any good. So I wrote the tips and gave them to my friend, but then I turned around and looked at my book and I wanted to cry.

I asked my editor again, Are you sure this book is okay? Because I don’t know, it feels awful. I was bracing myself for an email from my editor saying, Ellie, this book doesn’t work, and we know you can do better. I was ready for that email. Like, really, I was prepared for it. And I was fully prepared to reply with, Okay, that’s totally fine, and I get it and I’m really sorry and I’m more than happy to rewrite.

But that didn’t happen. My editor assured me (again) that the book was great. She’s a great editor, and my agent is a great agent, and I just had to trust that they knew, even if I didn’t.

Talking to Bec about it, on the roadtrip, I felt like I finally had a bit of clarity about it.

And then I blurted out, Because more of me is in this book than in my other books.

Which is when I got an inkling of why this book has felt so weird and odd and awful.

Writing this book, I felt like my compass needle never pointed in the same direction twice. Like I was fumbling around in the dark, and the only torch in my hand had failing batteries. Like I was using somebody else’s toothbrush – which is apt, because I had to borrow Bec’s toothbrush on the roadtrip, on account of me failing at adulting and totally forgetting to bring my own.

Do you know that feeling? It’s the same one you get when you have the dream about walking into class naked, or when you realise that you need to ask a stranger for a tampon, or you’ve neglected to pack underwear. It’s the embarrassed, vulnerable feeling. Vulnerable with a generous side order of anxiety and slowly increasing panic at how much you’re exposed.

Now, writers are supposed to be exposed and vulnerable. I think I knew that, somewhere in the back of my mind. But I didn’t realise how much it would impact on my writing if I really gave myself over to it. I didn’t realise how it would undermine my confidence in my own work, and change my practice, and make me question whether I was doing the right thing, or even whether what I was doing had value. I didn’t realise how much I would subsequently rely on other people – my agent, my editor, the grants panel, my friends – to tell me whether I was on the right track. I mean, I’ve had to put absolute trust in those people. Because I honestly have no clue.

Because all these years, I’ve been saying okay, I know that I write good, and I know the way it’s done. But this book… Ugh. This book, this stupid fucking book with so much more me in it, is giving me an object lesson in how being vulnerable in your writing is really different, and really HARD, in a way I’d never imagined.

It’s okay, Bec said, and she patted me gently, like my other friends. I know lots of awesome writers who don’t think their writing is any good, she said. And she named a few people I know. Which made me feel…better? I think it made me feel better.

And even coming to that realisation made me feel better. I mean, I still feel awkward and uncertain, and I have absolutely no idea whether the book is any good. I only have external markers – what other people tell me about it. And I don’t know if readers will like it, and want to buy it – I hope they do, but that is a giant question mark which will only be answered when the book is released.

But at least I think I know why I feel this way now. And maybe – if you’re in the middle of writing something that freaks you the hell out because it’s so hard and awkward and it makes you feel exposed – then maybe reading this missive from the frontline will give you some clarity too.

Note: Many thanks to Bec Kavanagh, for allowing me to use her name in this article, and for asking the right questions in the first place.