Summer has finally arrived here – very late indeed. We’ve had buckets of rain, and highly unusual temperature fluctuations that have seen us lighting the woodfire stove at least twice this November, which is totally weird for November.

We’ve also had some weird action in bookclub: I’ve extended the reading period for this month’s book into December. It’s to give people time to catch up with their reading of our title, GEMINA, but mainly it’s a chance for me to draw out the announcement of our end-of-year title, which will hold us over until I get back from family camping in December-January.

Here’s another funny little thing – this month’s title, GEMINA, written by the lovely Amie Kaufman and the sweet-as-pie Jay Kristoff (although they do kill a few people off in their books…er, make that quite a few. Thousands), was being promoted in the US at the time of our reading. Both Amie and Jay have been flying/driving/boogey-ing around America. Last I heard, they had 28 GEMINA-related events in 23 days (even thinking about that kind of schedule makes me gasp). Which has made it kinda tricky for them to contribute to a normal author interview or FB chat.

But never fear! Amie has sent me some leads that will answer bookclub’s burning questions. So below, I’ve compiled a few of Amie and Jay’s answers to some of the things that intrigued me most about GEMINA, and Amie and Jay’s writing process. If you’d like to read the full interviews, the links are below.

So, for those of you who’re interested in how the world of GEMINA came about – and with thanks and full credit to the original sites from which these answers came – read on…

The skinny on Nik Malikov’s tattoos:

The tattoos are inspired loosely by the tattoos of the vory v zakone, the modern-day Russian Mafia. Jay researched vory tattoos to get an understanding of the patterns of the iconography (he has an unhealthy obsession with international criminal groups – give him a drink and ask about the Hell’s Angels and you’ll be there for hours). But the House of Knives, which is the name of the syndicate Nik and Ella belong to, is inspired by several international criminal groups.  Members of the HoK get tattoos on their bodies to denote stretches they’ve served in prison, and the crimes for which they were incarcerated, which is a vory v zakone tradition. But they also have tattoos to denote their House affiliation, which is closer to the practices of the yakuza.

Nik has a particular tattoo—an angel across his throat—which symbolizes a certain crime he’s committed for the cartel. But, we won’t say anything else about that one, because, spoilers.

We have so, so much fun weaving together the stories and the design in these books. We start with a very general idea of the story, and then we build the design and the detail of the scenes hand in hand. Usually we plan about a hundred pages ahead, working out exactly what needs to happen. From there, we decide which character would best narrate those pages, and what format would suit them. It’s important that the storyline stand independent of the design – that if the story was told as a straightforward narrative in the usual style, it would still work all on its own. But that said, the design and the narrative are very much entwined – ideas about each drives the other. 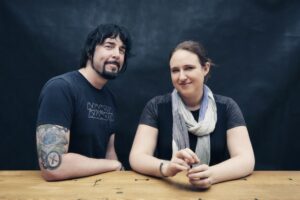 When we’re co-authoring, we both outline and plan more comprehensively, because we’re both working on scenes simultaneously, and we need to make sure we’re singing off the same score. Once we’ve worked out the next hundred pages and decided on who’s narrating them and what format we’re using – for example, to deliver information we might use a briefing paper or a schematic, or to check in with a character we might use a diary entry or a private email – we divide up who’ll write what. From there, we write, emailing scenes back and forth and editing as we go. Oh, and when the characters have a conversation using an instant messaging program, more often than not, that’s us jumping into an IM program and writing it via improv.

For research, we followed the same channels as we did in Illuminae – listened to and read a lot of content from astronauts and physicists, then wrote the book and ran it all past our own astrophysicist buddy who vetted everything in Illuminae. A lot of what people think they know about space comes from Hollywood, and Hollywood often sacrifices facts for the sake of spectacle. But we’re pleased to report we didn’t have quite so many notes from our astrophysicist this time through – so we’re slowly learning to separate the fact from the fiction.

On killing off characters:

We’re firm believers in the idea that victory without sacrifice is meaningless. We want you to be afraid that not all the characters you love are going to make it through this thing alive, and spoilers, they won’t. But to us, that’s what storytelling is about, and the losses you suffer along the way make victory all the sweeter.

As for death tallies in Gemina, we won’t give exact figures. You may be assured they are frequent and plentiful.

Start with the characters. They’re the core of any story, scifi or otherwise. Working in SF and fantasy, it’s easy to get caught up in the creation of the setting, but the heart and soul of your story needs to be the people that inhabit that setting.

Readers fall in love with characters, not worlds.

Knowing an astrophysicist doesn’t hurt either.

The best advice Jay ever received from another writer:

Never finish a scene during a writing session. If you leave whatever moment you’re working one incomplete, even going so far as to stop writing in the middle of a sentence, you’ll always have something to go on with the next time you sit down to write. It’s a great way to keep momentum going – you’ll never be dreading sitting down to write because you don’t know what to write next.

Why Amie reckons story-telling is important for everybody:

As we so often hear, stories allow us to live the lives of others. And that’s important for so many reasons. Stories foster empathy, they allow us to live and learn from other experiences… and they also just allow us to escape, and have fun.

Do you have the full lyrics for ‘I Wanna Lick Ya (Lollipop)?:

Yes, of course we do! You’ll even hear a snatch of it sung on the audiobook! We’ll share the whole thing one day… when the time is right.

If you want the full interviews, please ramble along to these links:

And see you next week, for the discussion of GEMINA (and all things involving space station infestations of carnivorous bio-forms) on bookclub 🙂