Emily Gale would have to be one of Australia’s best imports – an English émigré, she’s been enriching the local book-writing and book-selling scene since she arrived. She is an author of Junior and Young Adult fiction, and has worked in the literary industry for nearly twenty years, as an editor for Penguin and Egmont in the UK, and later with literary agencies and trade industry publication Bookseller+Publisher as a reviewer. She has been a judge for the Victorian Premier’s Literary Awards and worked at Readings Books as the children’s buyer, where she was instrumental in establishing the Readings Children’s Book Prize. She has written four novels for teenagers – Girl Aloud, Steal My Sunshine and The Other Side of Summer. She released Eliza Bloom’s Diary in 2014 for younger readers. 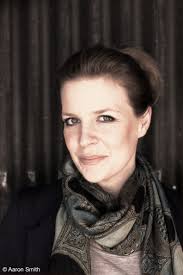 Thanks to Emily for participating in our end-of-year bookclub antics! Hope you enjoy reading more about the story behind I Am Out With Lanterns:

When I started writing The Other Side of Summer way back in 2011, it was a multiple POV book and Summer’s sister, Wren (she was then called Skye) was one of the voices. But I had early feedback that I was not going to be able to pull off a multiple POV, and I listened to it, deciding instead to make it Summer’s story. While I have no regrets about that decision, once I’d finished writing the novel I had a niggling feeling: was I really finished with Wren?

I’d always wanted to write a companion novel, and I felt I’d created a good set-up between Wren and her new best friend Milo, who are both keen artists. I was thinking a lot about the concept of selfies on Instagram – the way that young girls in particular are often castigated for these. I made the connection between female artists drawing self-portraits (similarly castigated throughout history) and centuries of male artists using and abusing female muses. At the time there was a spate of newspaper articles about teenage boys running accounts that featured photos of girls – many taken without permission (and various other forms of image-based abuse). The idea of teenagers trying to develop their self-image, while others were trying to control or abuse it, was a theme I felt very passionate about.

In 2016, when I first conceived of the idea, it was called Something Only I Can See because I knew it was going to be about perspective. I’m relieved now that I changed it because Barry Jonsberg’s 2018 novel is called A Song Only I Can Hear! Too close for comfort. At the end of the first draft I considered what I’d produced in terms of the six (or seven if you count the little one!) points-of-view and all the different homes we go into throughout the novel, and I wondered about Behind Closed Doors, but I was also considering the art theme and what each of the characters had experienced so I came up with The Art Of Making Mistakes. Then I found out that there was another Penguin YA novel bought in from the USA called The Dangerous Art of Blending in, which sounded brilliant, so my ‘art’ title went in the bin. And I still had so much work to do on the draft – it was messy and uncontained, what WAS this book? I went back to the beginning of my research, when I’d come up with the character of Juliet, who reads a lot of Emily Dickinson and feels a kinship with her way of looking at the world. I thought of a line in one of Dickinson’s letters to a friend: ‘I am out with lanterns, looking for myself’ – and I had chills. That was it. I’d written a story about what we all do at that age – form our identity, seek like-minds, wonder if the people we have become will prove loveable to those we desire. I really, really worried that my publisher and beyond that everyone else would find it a strange, slippery, eccentric title. I do get some strange looks when I say it out loud – but no one in the YA community has found it particularly strange. So I guess we’re all a bunch of wonderful weirdos.

Okay –three hot books you would run in to save if your house was burning:

I’d need to save one children’s book, one YA novel and something for my inner-adult, who occasionally gets a look-in. Frog and Toad All Year by Arnold Lobel never fails to cheer me up, and the stories in this collection are delightfully philosophical, so that’d be useful after all my other belongings are destroyed by fire. From my YA collection I’d rescue Take Three Girls by Simmone Howell, Cath Crowley and Fiona Wood, because that’s three-for-the-price-of-one in terms of saving my favourite writers. And finally I’d save the magnificent memoir I Am, I Am, I Am by Maggie O’Farrell, because the subtitle is ‘Seventeen Brushes With Death’ and when better to re-read that than when you’ve just risked your life to save some books?

The best opening line from a book, in your opinion, is:

“I write this sitting in the kitchen sink” is the first line of I Capture the Castle by Dodie Smith. I enjoy novels that turn the mundane into art and I love quirky narrators who are trying to figure themselves out.

I like any trope that involves a small town – the coming-home trope or the how-do-we-get-out-of-here trope. I think it’s because I grew up in London, so anywhere small and close-knit fascinates me. I’m a fan of love-triangles if they’re done well and I can embrace insta-love in the right hands. I’m not a fan of the makeover trope – for example, the part in The Breakfast Club where Molly Ringwald takes off Ally Sheedy’s make-up always irked me as a teen. In children’s lit I’ve always been a fan of ‘grumpy older character cheers up after meeting loveable kid’.

Thanks, Emily! The discussion post for I Am Out With Lanterns will be up on the #LoveOzYAbookclub group page in a few days