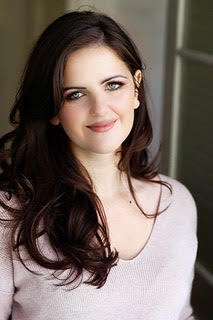 Our Author Interview for May is from Sophie Gonzales. We asked Sophie five questions to hear a little more about her and the background for Only Mostly Devastated.

What made you decide to do a Grease retelling and have you always been a fan of Grease?

I’ve been a fan of Grease since the first time I watched it as a little kid (although let’s be real, I didn’t understand about 80% of what I was watching… but I definitely knew I liked the music!). With Only Mostly Devastated, what I wanted to do was address what I saw as a gap — we’ve had a million of the same set-up, very tropey and cliche’d rom-coms starring a white, straight cast. I wanted to take these set-ups and tropes and give them to a queer cast, to let them have their moment. Did the result end up being original? Nope, not at all — in fact, I was quite consciously aiming to create something very similar to the stories straight people were allowed to have over and over and over and over again before the tropes and plotlines were declared cliche. It was, in a lot of ways, my way of pushing back against the idea that heteronormative stories are allowed to just be, even if they’re unoriginal and only exist to be a little feel-good and cheesy, whereas queer stories must have a “reason” to exist, and to do something especially new or spectacular, to “add to the conversation”. Of course, this doesn’t mean that the queer experience doesn’t affect the plot and characters — simply being queer adds something “new to the conversation”, given how little rep there has been historically! But plot-wise, I went unapologetically cliched. The Grease jumping-off point seemed, to me, like the perfect place to start, but I think the story goes in a very different direction to Grease. It’s more an homage than a straight retelling.

Your book has an awesome title. But what might it have been called, if it wasn’t called what it is now?

The title was weirdly easy to pick! I had very little notice we were taking the book out to editors, and my agent asked me to give it a name, so I scanned the hundred pages of material we had at that point and noticed the line “Here walks Ollie DiFiore . . . only mostly devastated” and that line jumped out to me as encapsulating what the story is about, and representing its vibe. I don’t know what it would’ve been called otherwise, as we never threw any other options around! Probably another line from the book? I got much luckier with OMD than I did for my newest book (title to be announced this week). It took over three months of emailing back and forth for us all to settle on *that* title!

What is a curious or unusual thing about you that most people don’t know?

Hmm… I believe in ghosts! Have definitely lived in more than one haunted house in my time. My roommate didn’t used to believe me, but then one day in my early 20s I found a necklace from an old haunted house I lived in (it was a beaded necklace. No one bought it for me, I just found it around the house when I was 8 and claimed it. Mum didn’t know where it came from), and I decided to start wearing the necklace again. A few days after I found it, I was packing for a trip to Sydney, and put that necklace on top of my clothes in my suitcase, along with an owl necklace. Both necklaces were the type that go all the way around, and are nice and long — no clasp, just an unbroken circle. Easy to get over your head. Anyway, I took a phone call around this time, and the call was creepy — it kept getting interrupted by what my sister described as a “demonic sound”, so we cut the call short. As I hung up, I decided I wanted to keep the owl necklace out to wear on the plane, but when I went to get it it was looped through the beaded necklace. Like two rings hooked together. This was physically impossible, as neither necklace had a clasp or opening point. I showed my roommate, and he agreed this was impossible. But we both saw it. In the end we had to cut one of the necklaces to separate them… and we chose to cut the owl necklace. I had no intention of cutting open a potentially haunted necklace and finding out what the fallout of THAT would be!

If you could have anyone, who would you cast in the smash hit Netflix adaptation of your book?

Smash hit Netflix adaptation!? Yes please!! This might be a boring answer, but I would love to see some newcomers!! It would be super important to me that there is no whitewashing and the casting is accurate in terms of race, and I’d love to see queer actors getting involved as well. If we’re playing dream cast, I’d love to see one of my celebrity crushes in one of the adult roles like Kristen Bell, Leslie Odom Jr, Idina Menzel, Lin Manuel Miranda…. someone like that, purely for selfish reasons, so I can sneak onto the set and become best friends with them. Is that allowed? In my fantasy it is.

If you could only take 3 books with you on holiday, what would they be?

Only 3!? Let’s go with my favourite book of all time, The Long Walk by Richard Bachman / Stephen King (it’s devastating to read but in a cathartic way), a new one I’ve been dying to read but haven’t yet (Maybe my copy of You Have a Match by Emma Lord!) and an old-but-new-to-me, like the Percy Jackson series, which I’ve heard is incredible but am yet to get to!

Thank you so much Sophie for talking to us, we look forward to hearing about your new title!