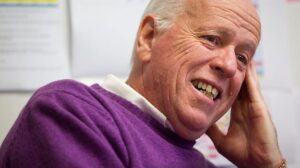 Hey bookclubbers! This month’s book, INTO THE RIVER, is sure to create some interesting discussion, especially around the issue of how and why it was banned in New Zealand. But before we get into the serious business, I thought it’d be nice to ask the author, Ted Dawe, to answer some lighter questions about himself and his writing process. Thanks for joining in, Ted 🙂

* One curious or unusual thing about you that most people don’t know:

low ebb I sent the manuscript to J M Coetzee in Capetown, SA. He had just
written Disgrace and it struck such a sharp note of truth with me I felt
he might be able to tell me what was wrong with my manuscript. About a
year later it was returned with an apology for lateness and a few useful
suggestions. This gave me such a boost of confidence I immediately sat
down and began to write a new novel called Thunder Road. It was picked up
by a publisher immediately and went on to win the NZ Post Best YA novel
and the best first novel award. Ever since then Coetzee has been on page
one of my book of cool.

I felt this story was one that needed to be told. Its New Zealand
provenance was important both geographically and culturally. I hoped that
readers would enjoy looking into this world. Once I began to write the
novel the problem of where to finish it was continually hounding me. I
eventually decided what looked like a natural break in a longer narrative
and ended it abruptly at this point. What happened next was put into the
sequel ‘Into the world’.

* Working in silence? To music? With snacks? No snacks? What are the
essentials for your writing routine?:

I need a place to write. An idea to pursue. And a deadline to keep me on
the job.

* Why write for teenagers?  Why not adults, or little munchkins?:

I write for teens because it is a time for intense emotions and new
experiences. They are at a stage where so much is happening to them so
fast and they lack any real frame of reference. Teen books can fill this
need. They can take teens to wild and dangerous places where they can
experience life-changing events without the damaging consequences that go
with them.

* The best opening line from a book, in your opinion, is:

‘The past is a foreign country; they do things differently there.’
L. P. Hartley, The Go-Between