Chris is our special guest in the hot seat for this month’s bookclub grilling – and not only did he rise to the challenge, concocting an amazing-sounding cocktail in honour of Clancy, but he dug through his archives to find (in draft form) some of the earliest words he wrote that made the book happen (ahh, writing in the Myer Centre…as a former Brisbane native, I remember it well).  So keep reading beyond the questions to find out where Chris wrote a big chunk of the novel, and for a window into the thoughts that went into the development of the characters.  Thanks for being our May 2016 guest, Chris, and double thanks for the insight on your creative process with this amazing book!

* Your book makes No#1 with a bullet on the NYT Bestseller List, and a famous bartender at the Ritz-Carlton makes a cocktail in its honour.  What’s in the cocktail and what is it called:
Some reviews of my book have accused my book of being “too Aussie”, which is a strange thing to say about an Australian book set in Australia and written by at Australian writer. So, the cocktail called The Clancy consists of cold XXXX poured over layered pineapple and beetroot slices, shaken, poured into a martini glass, sprinkled with crumbled Tim-Tam and then a thin layer of Vegemite is smeared over the rim. Crikey!

* Rec us a book on writing craft, would ya?:
For pure inspiration: Anne Lamott’s Bird by Bird. For actual nuts and bolts instruction, you can’t go past Strunk and White’s The Elements of Style.

* One of your favourite words and why:
I think one of them, from a purely useful writing perspective, is said. One of the simplest pieces of writing advice you can receive is “show, don’t tell”, and this is best expressed when you’re attributing speech.

I remember clearly in school being asked to think of as many verbs as I could to replace said, as this was the better to tell people how your character was feeling. I find it a far better exercise, however, to only use said (or, as Clancy is in present tense, says), and express how the character is feeling through what they actually say, not just to use a verb to do the work for you. This is a good habit to get into, in my opinion, as it allows your dialogue to be clearer, more expressive and hopefully more interesting to read. But it this advice doesn’t work for you, at least kill all adverbs. Kill them murderously.

* Tell us some interesting tidbits you gleaned while researching your book:
I’m pretty much allergic to research, so there wasn’t a lot done, outside of the normal YA things like looking at school holiday dates etc.

Barwen, the fictional town Clancy is set in, is very much based on the small country town I grew up in, which I found to be so useful when trying to spatially imagine the locations of the book. It makes it so much easier when you know exactly how long it takes to cycle from your house to the weird observatory or where a makeup counter should be in relation to a food court: strange little things that I would have stressed over in the past when creating a fictional world.

At one stage the book was set in the late 80s (and doesn’t every YA author yearn to set a book in the time they grew up in?) so I ended up looking a lot at a particular famous cricket match (the Tied Test between Australian and India), which was going to feature much more heavily and tie into other themes in the book (as it ends up, there is just a generic cricket match going on that Clancy’s dad is listening to).

* The zombie apocalypse strikes, but it’s okay, cos you have your choice of weapons, and you choose…:
To be honest, I’m terrible under pressure and not at all resourceful so I get anxiety thinking about a zombie apocalypse not because of the zombies, but rather the minutiae of what an apocalypse entails. The end of the world means, to me, no coffee, no WiFi, no high-quality television, which is, frankly, chilling. I’d be so worried about something like the lack of available toilet paper that I think I would let the zombies take me straight away. At least zombies have a simple life. 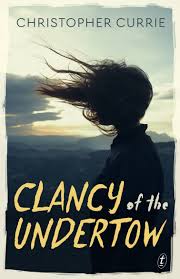 Chris:   I found this in an exercise book when I was clearing out some bookshelves recently. It’s the very earliest writing I did that became Clancy of the Undertow. I thought it might be interesting to have a look at it. I’ve kept everything exactly as I wrote it, terrible grammar, punctuation and all. I’ll comment as I go after each paragraph, because some of this stuff is so different to what the book turned out to be!

Whereas me, I lose change down the front of my shirt. Am described as “willowy” by people who do not know what this word means. Have a constant, quizzical mouth-full-of-toothpaste look about me which has been present since birth and seems to be here to stay. Red hair, blonde, brown—wavy like a fucking crumpled car door. Awkward, titless, something approaching hopeless.

Chris:   Some familiar lines in here. Can’t believe they made it to the final version, and—in one instance—the back cover blurb!

I work three days a week in a makeup shop in the middle of a shopping centre. As in, right in the middle where you walk. I sell nothing all day, give directions to about 400 people and spend a lot of time doodling. There’s one security guard, Reeve, who’s young like me, and we talk from time to time. Reeve’s role is mostly ceremonial. He has a bruise on his brain.

Chris:   As you may have guessed, I was doing a lot of writing in the Myer Centre in Brisbane city, which is a multi-tiered shopping mall. I would sit at this horrific chain cafe on the second to-top level, which would allow you to look down at people on the lower levels. One level down was a remarkably unsuccessful cosmetics kiosk, manned on this day by a girl who would become the character of Clancy. She did chat to one of the security staff at one point, but he was a lot older than Reeve.

I stay in this town because of school, because its quiet enough that I won’t get bothered. My dad works for the council—on the road mostly, flipping STOP and GO signs. Had a lot of work when the council decided to “beautify” the city, landscaping the main street, planting bizarre tropical plants, turning everything into ‘levels’ and ‘slopes’. While dad spends time outside vocationally, my mum is, voluntarily, an outdoor type. She used to run tourist tours in national parks, ones where they abseiled whole companies down cliffs, threw CEOs into rapids, etc. Now she’s involved with primary schools, getting our clinically obese kids into shape, takes a cheque from the government for doing so. Which is to say, my parents are active, out and about a lot, not at home a heck of a lot.

Chris:   So Clancy’s dad didn’t change much from this original sketch, but her mum certainly did! I had completely forgotten I’d given her this background as an outdoor type. I would like to say this was the seed of Nature Club, but that idea didn’t come about until my second draft. I would argue Clancy’s mum is a much more interesting character here!

Boys at my school inevitably walk with that bow-legged, vulture-necked, arms out body-builder style. Why? I don’t know. There were all gangly, too angled, even the ones who had somehow matured earlier that others. We were all just slaves to our hormone glands, our perceptions of who we should be shimmering like heat haze. My brother, my so-called twin, was a surly, angry version of me. Never grateful for anything, but always wanting something. My dad’s dad, my grandfather, was a near-helpless bag of bones. He lived in assisted care in a retirement village on the outskirts of town. Dad and me were the only ones who visited him. Mum, I think, couldn’t properly fathom a human form in such bad decay.

Chris:   This section I’m sure just came from people-watching. The grandfather character certainly shuffled off the mortal coil between here and the first draft. I think I only mention him in the final version to make a joke about crossword puzzles (and as a source of an inheritance). Also, Angus is Clancy’s twin???!!!

Julia, the lady I work for is a human form in perfect preservation. Somehow, she survives in this country town. Silk blouses, all the colour and consistency of cream. Reeve, who as I mentioned, chats with me a lot, adores Julia. Reeve wonders how she ended up here. He also wonders where all the clothes go after a fashion show. How those florid, artistic, answerable creations filter down to the strip-lit chain shops that spring up every summer in the shopping centre.

Chris:   Julia is a complete fiction, but her mannerisms and affectations (which aren’t present yet) are based on someone I knew growing up. The weird fashion sidenote I’m sure is just because I was writing in a shopping centre.

Anyway, Julia is thirty, bluebird tiny, made of porcelain, or some other such cliche. She joined mum’s short-lived home gym (Julia, as it turned out, was the gym’s only customer) and offered me my job, which I still have and tolerate, because it makes me seem normal and give me some pocket money for the very few things that I buy.

Chris:   Home gym? At least it’s an explanation for why Clancy works somewhere as unlikely as a ‘Beauty Station’, something I don’t think I actually explain in the book!

Coool bananas!  Join us at #LoveOzYAbookclub again soon to jump into the discussion of this month’s book, CLANCY OF THE UNDERTOW.